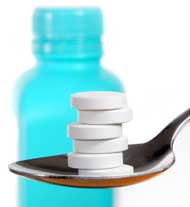 Over lunch recently a MANA manufacturer member shared his experience with rep councils, and also shared an unexpected outcome from a recently assembled rep council: relief from excess stomach acid.

But I’ll let him tell the story.*

“We’ve been a big believer in rep councils for a long time, for all the usual reasons.

“Because our five rep council members collect input from all of our reps, analyze it, and then present it to us without identifying the source, nobody feels that they might jeopardize the line by pointing out our weak spots.

“But anonymity is only the first step. No one will spend time preparing that feedback unless they know that we will act on it. So, step two is prompt executive response. Our rep council’s report goes directly to our top executives and they respond within six weeks, bullet point by bullet point. Some of the bullet points are acted upon quickly, some are queued for attention later, and some may not be practical to pursue, but every bullet point gets a response.

“We get great results from our rep council, but I recently got an unexpected benefit from the rep council: relief from excess stomach acid.

“Let me explain. One of our reps who also happens to be a member of the rep council made a request we just couldn’t accommodate. When a rep requests something we just can’t do they often will ask again a second or third time, but eventually they accept the bad news and move on to other opportunities.

“But this guy was like a dog with a bone. He just wouldn’t let go. Every couple of weeks he’d push me for the same thing again, as if I could give him a different answer the 16th time he asked than I had given him the first 15 times.

“But he is a very, very effective rep, so I bit my tongue. Then at the rep council meeting he asked the other four reps serving on the council to back his request. And all four told him that his request was completely unrealistic. When I had to turn him down, it sounded to him like I was just defending my company. But when he heard it from his counterparts, it sank in. He never brought it up again. No more heartburn.

* I’ve recounted the substance of the manufacturer’s story, but details and phrasing have been changed.

My dad recounts a story from his early days as a salesman. One of his competitors showed up for a sales call at the purchasing agent’s office. He started the call by asking the purchasing agent “How are we doing?” The buyer reached into his pocket, took out a dime, flipped it to the salesman and replied “Why don’t you go down to the pay phone in the lobby and call your office and find out. When you know the answer come back up and see me and you can tell me….”

Had the salesman taken the time to check … Read the rest

As it does in most fields of endeavor today, a rapidly evolving technology impacts the lives of independent manufacturers’ representatives — especially when it comes to preparing for sales calls. The typical sales call remains the lifeblood of any agency’s operation. That’s why the adage “Failing to plan is planning to fail” is so important. It’s critical to integrate the positive contributions that technology makes to sales call preparation. Whether it’s navigating through contacts on LinkedIn, ensuring the right CRM program is in place, or mining a wealth of information that can be found on the Internet, technology can serve

If there are common threads connecting the newest members of MANA’s Board of Directors, those threads might very well be listed under these headings:

The three new members of MANA’s Board who possess those common threads are:

Readers of Agency Sales should be familiar with … Read the rest

As he looks back to the year 2011, Charley Cohon admits he was asking himself what he was going to do with the rest of his professional life. “Call it a mid-life crisis or whatever you like,” he says, “but I was at a point where I had been a successful independent manufacturers’ representatives for more than 25 years. I was wondering if this is how I close out my career, or should I do something different? And, if it’s the latter, exactly what am I going to do?”

With the development of the Internet, social media, and the “new” relationship and solution selling techniques, there seems to be a belief out there that today’s salespeople are superior to those of the past. As you can probably gather from the title, I don’t necessarily agree. Here’s why.

Here are the key factors that give the old guard an advantage over the new guard:

When my dad went for training at IBM in the early ’60s, it was primarily sales training. Yes, you learned the product too, but they made sure you knew everything about selling: … Read the rest

So, you have created a customer, you’ve actually sold something, and you have some money in the bank. Feel free to celebrate and luxuriate in the good feelings that bubble out of you. That’s one of the fringe benefits to selling — it feels great when you succeed.

Before you become too enraptured with yourself, let me remind that you are not finished. There is a greater goal, and a larger and more encompassing strategy into which this transaction fits. If you focus all of your time and energy on creating sales, you will, unfortunately, miss the mark.

In a … Read the rest

Ask salespeople what customers want from them and you’re likely to hear such words as friendly, positive, responsive and problem-solver. Whatever else they may be, these are “the comfort words of sales.” It’s how salespeople picture themselves.

Ask customers what they want in a salesperson and the words they use may be quite different. What they are looking for is integrity, responsiveness, initiative, knowledge and guts.

This suggests that it’s in a salesperson’s best interest to align their performance with customer expectations. It’s not only the way to keep them happy; it’s the best way to keep them as customers. … Read the rest

In today’s sales’ environment — where product and service solutions and customer relationships are growing more complex — there is an increasing need to continually raise the skill level of salespeople. Managers play a critical role in making sure those skills are learned and used.

Statistics speak loudly that manager support/coaching is the number-one action that can amplify an organization’s sales performance:

Finding a quality person to fill a position is not an easy job. Although many people think they can be effective in sales, the reality is that few can do it well. Even more amazing is how many employers want capable salespeople, but are not willing to compensate them accordingly or invest in their development.

I once read a survey conducted by the employment organization, Manpower. They polled 32,000 employers in 23 countries. The results indicated that the number-one position they had trouble filling was not specialized like an engineer or accountant as some would expect, but, rather, sales representatives. … Read the rest

Don’t ever underestimate the value of the advice you receive from members of your rep council. That was the recommendation from one manufacturer fresh off his first rep council meeting of the year.

“You put the group together with the hope that they’d be honest with you when it came to the most effective ways to work with your rep network. If you’ve gone to the trouble of all the work of selecting members, planning agendas and executing your meetings, why not take advantage of it?”

Often — much too often in my view — I talk with CEOs who are still resistant to getting involved with social media. It’s as if they view sites such as Facebook, LinkedIn and Twitter as little more than pesky annoyances that are irrelevant to what they do.

They fail to recognize just how powerful social media can be as a tool that allows them to promote their brands, communicate with customers and handle damage control when complaints come tumbling in.

What they don’t realize is that abstaining from social media really isn’t an option any longer. Social media carries … Read the rest

I am in the midst of a sales representation agreement negotiation with a client of mine who represents principals to the automotive industry in Michigan. I have been in several similar negotiations over the past few years and thought that the issues may be of interest to MANA members, especially those who are sales representatives.

First of all, I should include somewhat of a disclaimer. My entire law practice is focused on representing sales representatives in commission disputes and related matters. Most of my clients represent principals to the automotive industry in North America and more and more of the … Read the rest

Have you ever had the opportunity to watch the program Who Wants to Be a Millionaire? The premise of the hit TV show focuses on a contestant who selects one of four multiple-choice answers to a trivia question. The more questions they answer correctly, the more money they can win.

But, of course, the questions get progressively more challenging, so the contestant is offered three “lifelines” when they’ve become stumped on a particular question. One lifeline is called “50-50” where the computer takes away two of the wrong answers and leaves the contestant a 50-50 chance of guessing the correct … Read the rest

Two successful Cincinnati-based companies that have been providing products and services to the manufacturing, processing, and packaging industries in Ohio, Kentucky and Indiana for nearly 100 years have merged. Henry M. Wood Company, founded in 1928, and the Batsner Company, founded in 1919, are joining forces to provide seamless solutions. Both companies are founding members of MANA.