If manufacturers’ representative associations like MANA are a good idea, why aren’t there organizations similar to MANA across the globe?

One of those best practices came to MANA in 2013 from Austria’s commercial agents association, Bundesgremium der Handelsagenten. MANA adapted the Austrians’ “explainer video,” describing sales force outsourcing, to English and it has since been viewed over 15,000 times on YouTube. 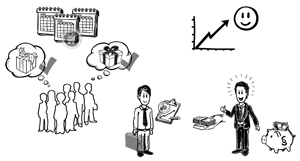 MANA’s version of the Bundesgremium der Handelsagenten video has been viewed more than 15,000 times.

MANA leaves no stone unturned as we search for the best international resources to serve our members. We would welcome your help finding more and better benefits to include with your MANA membership. Please share your ideas with MANA today!

What are the odds that your very first deal as a manufacturers’ representative turns out to be a long-term contract on $50 million in sales per year and you’re guaranteed to land the project with one of the handful of manufacturers you are working with?

The intention for this column is to provide new and old reps with horror stories from the field so that we can use our collective experience to help each other avoid some of the common and not-so-common pitfalls of our profession.

In this article we look at succession planning strategies to consider, pitfalls to avoid, and real-world examples of manufacturers’ representative firms that have successfully transitioned to new ownership.

But first, a disclaimer. I am not a lawyer. I am not an accountant. This article will share with you some strategies to discuss with your lawyer and accountant, but this is not legal or accounting advice and it is not intended to replace the advice of the legal or accounting professionals who will be crucial to the success of your succession plan.

In the article that precedes this one, MANA President and CEO Charles Cohon takes aim at the subject of succession planning. As he draws upon real-world examples of why succession planning is so critical and addresses many of the how-to steps to take in order to get the job done, it’s worth noting that MANA and Agency Sales magazine have for years espoused the critical benefits of planning, forming and executing an effective succession plan.

More than a decade ago, under the heading of “There’s No Success(ion) Without a Plan,” this publication pointed out that the existence of a workable … Read the rest

From a Michigan MANA representative member

I just wanted to tell you how useful the MANA website and resources were for me recently. I was struggling with a presentation and, in this instance, found exactly what I was looking for at the website. A few weeks later, the MANA resources helped me close on a nice deal that will bring in $50,000 in commissions a year. There is a wealth of information at www.MANAonline.org — and for any agency, new or old.

It always amazes me when reps struggle to justify their membership dues in our association. Thanks to MANA … Read the rest

For most of us, what we learn first sticks with us for a long time, often throughout our lives. Nursery rhymes, along with what we consider right and wrong. The acorn doesn’t fall far from the tree.

It happens to salespeople, too. Because our early training is indelible, it stays with us to guide us. But new demands and expectations call for strategic changes to keep up, stay relevant and close more sales. Here are several of them:

Change Your Thinking About What You Know

Salespeople are known for being sure (sometimes overly sure) of themselves. Although it takes self-confidence … Read the rest

“One of the greatest discoveries a man makes, one of his great surprises, is to find he can do what he was afraid he couldn’t do.” — Henry Ford

Are you afraid to fail? If so, your fear of failure is likely to limit your chances of success. If you look at really successful people, you will often find significant failures in their backgrounds.

The list is lengthy and includes college dropouts, such as Bill Gates, Steve Jobs, and Mark Zuckerberg. Why? There are a lot of reasons. Most stem from the fact that they are (1) willing to try … Read the rest

It didn’t take long for Bernat Riera to take advantage of his MANA membership. Shortly after joining the association the Waterville, Quebec, rep put the wheels in motion for the first of what is hoped for several networking meetings for members in Eastern Canada.

Riera, Les Produits BR, explained that the initial meeting in February was to be followed by another last month. “Several MANA rep members from the province of Quebec met with the joint goals of networking and identifying common interests. Our agencies basically cover eastern Canada and some represent lines for the entire country. The results of … Read the rest

What is the pay-off? What should it cost?

Sorting Out the Lines

Before you start to think about backselling it is vital that you look over your commission performance by line. Who matters? Five percent is a good cut-off line. If a line doesn’t produce five percent of your income, it does not merit serious attention; unless you expect it to grow to five percent within 12-24 months.

This sounds arbitrary and it is! Too many reps spend too much time messing around with minor lines that can’t be important in 100 years. These lines should be resigned and off … Read the rest

Welcome to the information age. You are not unique. This problem of information inundation is a relatively new but almost universal threat to your livelihood. Four or five years ago, salespeople were not too concerned with it. Today, dealing with information is so critical that it is an important part of almost every seminar I present.

Here’s the issue. Technological advances in recent years have multiplied the amount of information that you must handle. The quantity of information landing on your lap has increased from sources … Read the rest

There is a much-overlooked aspect of sales success that is rarely spoken about and barely attracts attention: self-talk.

The most important conversation is the one you have with yourself. The reason that conversation is so important is that the words and language you use both reveal and reinforce your beliefs about yourself and the world. Those beliefs dictate the action you take, or don’t take, and ultimately determine success or failure.

If you have a problem selling, you more than likely have a self-talk problem. The difference between the top salespeople and everyone else is that the top people became … Read the rest

“I’ve been the head of sales for more than 20 years and most of that time has been spent working with our outsourced sales staff. During the majority of that time our reviews were pretty standard. We looked primarily at sales figures from … Read the rest

Most entrepreneurs and salespeople today are regularly on the road. Being on the road gives you the advantage to be with clients and important decision-makers.

On the road, however, you need the tech tools that let you get the job done under any circumstance. The tools that I describe in the following could help give you a competitive advantage.

Recently I had the chance to see a few tools that I want to share with you — mobile professional to mobile professional. Here are four that I’ve experienced lately that can help give you a competitive advantage — and perhaps … Read the rest

I love it when folks ask me these questions and the ensuing conversations. Those talks are always fun and interesting because, in general, most investors (and their advisors) often put the cart before the horse when determining investment strategies. They’re seeking tactics without first formulating an objective.

So my standard reply to these questions is, “Overall, what are you trying to accomplish with this pile of money?”

I … Read the rest

Cahill was recognized for her many years as an officer of Empire State ERA, her three-time chairmanship of the ERA Conference Committee and her current service on the ERA Executive Committee.

This award was created in 2017 to honor Tess Hill, a long-time ERA staff member who recently retired. The award recognizes individuals for their longevity of service to ERA, for inspiring volunteerism … Read the rest

Manufacturers’ Agents of Cincinnati (MAC) had a sell-out crowd April 13 for MANA President and CEO Charles Cohon’s presentation, “How To Value and Sell a Rep Firm.”

“More and more manufacturers are basing rep choices not just on projected sales performance, but also on their comfort level with rep firms’ long-term plans to maintain continuity when the primary owner retires,” noted MAC when announcing this event. “In this session, Charley will discuss how retiring owners can value and sell their firms, and what prospective buyers will look for in a succession and buyout plan.”

Other representative associations that are interested … Read the rest