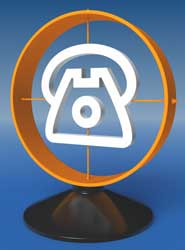 One of the most common reasons that reps and principals end up going their separate ways is a breakdown in communication. So it’s no surprise that one of the most-requested topics when I speak to groups of reps (most recently to the Southern California Chapter of the Electronics Representatives Association) is how to effectively communicate with principals.

The single-most important piece of advice MANA has is to avoid being overly reliant on e-mail. When a topic is complicated, or when the exchange seems to be getting heated, or when the e-mail chain gets to be 10 pages long, there is no substitute for picking up the phone and having an old-fashioned conversation. You may have to play phone tag to get the conversation launched, but once you get the conversation going you can resolve issues that never would have been resolved by e-mail.

Another best practice in communicating with principals is to share information about problems early while the problems are still small, rather than waiting for a problem to become so monumental that it defies resolution. Bringing up a problem early has another benefit, notes one rep — it gives you the opportunity to share the problem’s back story with your principal before someone with an agenda contacts your principal with a version that has been spun in a way that is not to your advantage.

Communicating regularly — not just when there’s a crisis — does more than just build rapport with the principal. It also makes your calls more welcomed. Put yourself in the shoes of a principal who only gets calls from Jane when there is a crisis. Jane’s name popping up on the principal’s caller ID will always be met with a grimace, because the principal knows when he sees Jane’s name that it is always a difficult conversation.

MANA also counsels that the best communication is often unscheduled communication, during down time at a tradeshow booth, or driving between sales calls together, so resist the urge to abandon a slow tradeshow or take separate cars when a principal visits your territory.

The principal’s perception of what is going on in the territory will be primarily shaped by the information the rep communicates (or fails to communicate), so it is important for the rep to recognize that for the principal, perception is reality and the rep’s communication skills (or lack of them) will make all the difference between a positive perception and a perception that is not positive.

If you have not been able to attend a MANA seminar on this topic, you can view my presentation to the Southern California Chapter of Electronics Representatives Association on YouTube at http://bit.ly/17xLLCZ, or follow the YouTube link at the bottom of the home page at www.MANAonline.org.

I periodically receive phone calls from MANA manufacturer members telling me a prospective manufacturers’ rep requested a fee to take on their line. “I thought reps work on a commission basis only, what’s this about?” they ask.

If the manufacturer has little or no business in the territory, it takes more time to develop the business. And, time equals money. While customers trust the rep you want and buy from him or her, they also trust and buy from other salespeople who call on them. The manufacturers’ rep with the missionary line has to work really hard to replace the … Read the rest

This article is the fourth in an ongoing series exploring the subject of MANA serving as the association for professional manufacturers’ agents and high-quality principals that work with each other as partners in profits. This month the subject of shared territorial development fees is examined.

Introduce the terms “territorial development fee” or “retainer” into a conversation with an independent rep and chances are there will be an animated reaction. The questions are: Will that reaction be positive or negative? Do such approaches to developing new business work, or is there a downside?

When I wrote an article a few months back entitled “The Top Five Sales Myths,” the response was overwhelming. As a result, people have asked me to debunk some additional sales fables.

Price Is the Most Important Factor

Studies show that only seven percent of people buy on price, 93 percent buy primarily on factors other than price. Mass advertising and low-priced ankle-biters have brainwashed people to think that price is the only difference in products. It is your job to bring people back to reality and change their perspective. You have to remind them … Read the rest

For William, finally hanging the “grand opening” banner on the facade of his business was a dream realized. After years of drafting and redrafting plans and budgets, applying for loans and acquiring the initial capital to break ground on his new property, he was able to turn his goal of owning and operating a local business into a reality.

At a recent Chamber of Commerce meeting, William found himself in a conversation with a colleague that proved invaluable. Amidst discussion of business tactics and customer development techniques, he was clued into a spectrum … Read the rest

It has been said that salespeople who avoid making phone calls have skinny children. Prospecting for new business is critically important and for the majority of salespeople, it is by far the most challenging and stressful aspect of their profession. Successful salespeople are proactive and recognize the importance of prospecting for new business daily. They don’t have to be reminded to ask for referrals or follow up on a sales lead, they do it automatically. This article is full of helpful phone calling tips and techniques which, if put into practice, will fill your appointment calendar with new business opportunities!

The Boldt Company builds mammoth construction projects: power plants, hospitals, educational and industrial complexes. But before Boldt can build, it must win bids. In the past, its bid team, working in the time-honored way, pitted Boldt’s numbers against its competitor’s numbers. Their win rate was one in ten.

Some business ideas seem to have a life of their own, particularly since they sound so reasonable. They’re so much a part of the culture and so obvious that they go unchallenged, requiring neither proof nor explanation. Since they’re “self-evident,” they gain truism status. But once unmasked, they’re revealed to be what they really are — untrue.

But that’s not all. Some truisms aren’t only false; they can also be downright dangerous. Here are several popular business truisms that deserve a closer look:

How to Reverse the Entitlement Attitude of Your Problem-Staffers

On another occasion, Sherrie was asked to stay an hour past her normal quitting time. She refused on the grounds that she was not given enough notice and that she’d already made other plans that were “unbreakable.” When her manager commented on her unwillingness to help out, Sherrie explained that she felt she should be paid more if she was expected to do the work of other employees. In spite of her mediocre job performance, she expected to receive a large bonus at the end of the year. When her supervisor … Read the rest

There was no shortage of responses to a survey conducted by a manufacturer when he asked his reps what type of support they valued most from their principals. While responses covered a variety of areas, three distinct subjects were raised time and again.

Regular and timely communication — Nothing makes the reps feel more like a member of the team than always being included in the loop when it comes to corporate information. According to one rep respondent, “We don’t like surprises. They catch us off guard. That’s why when there’s a new personnel appointment, new product announcement, price change … Read the rest

Based on conversations with clients I find many do not measure the number of new customers activated on an annual basis. To be sure, managing your existing customer base is important, but churn is a fact of life, so we must always develop new business.

This article outlines an important form of demand generation — the sales continuum and how your sales team can actively work new opportunities to win the coveted new account.
The sales continuum is important both from a sales execution and marketing standpoint. In sales execution, sales producers know precisely where their new business opportunities reside … Read the rest

Follow-Up. This is a critical, and often neglected, skill for success. It is imperative in today’s busy world. Your prospects are swamped with all kinds of communication that they need to address. We are all so swamped with so much to do that we have to engage in massive filtering on a regular basis.

So How Can You Follow Up Without Being a Pest?

You can’t just keep calling with some lame response like, “Uh, I’m just calling to see if you got my dull and boring e-mail from last week.” Ugh! We all have been accustomed to the unwanted … Read the rest

Although most manufacturers abide by the MANA code of ethics and pay their agents in a timely manner all commissions owed, sometimes unfortunate circumstances arise causing an agent not to be paid. In the case where litigation thus arises, it is critical to have certain key contract terms to protect your rights.

Having seen many different representation agreements (contracts between sales agents and their principals) presented by sales agents in a wide variety of industries, there seem to be several universally misunderstood, absent or poorly written terms:

As the bartender delivered our appetizer dish, my friend Steve glanced up from his recently opened retirement statement and quipped, “Roger, where did you learn all of this stuff about investment strategies? I’ve known you since your college football days, and I know you’re not smart enough to make this stuff up on your own.”

Steve was right. (Even about the intelligence part.) In the 30 years that I’ve been in this crazy, erratic business, I’ve been fortunate enough to learn a trick or two about investing. But his question took me back to my early apprentice days working as … Read the rest