“We have had great success selling through reps,” said the manufacturer, “and we use reps throughout North America. Except of course in the home territory.”

He said “of course” as if there was no other choice.

Why do some manufacturers think selling without a rep in the home territory is an “of course” decision?

Sometimes a small company’s founder feels customers he or she developed in the company’s early years require the founder’s continued personal attention.

Other times a manufacturer thinks it’s cheaper to tack responsibility for local customers onto the other duties of a local employee.

What happens when the founder is still the salesperson for customers in the home territory? One of the founder’s two jobs suffers.

What happens when sales calls on local customers are tacked onto the duties of a manufacturer’s local employee?

It’s a no brainer. Why would a company squander its home court advantage by assigning local sales responsibility to someone who can only make sales calls when they can squeeze them into their schedule around the duties of their “real” job.

That’s why many manufacturers use reps in their home territory. They need a sales force that has one job — to call on customers and prospects all day every day.

A look at our membership shows significant diversity. Our largest member employs 53 outside sales employees, the average is five employees and 20 percent are one-person operations. Forty-one members started their manufacturers’ representative businesses within the past two years. Our average member started their rep firms 33 years ago and our oldest member started in 1918. MANA manufacturers’ rep members sell into diverse markets as well, from OEM accounts, reseller (wholesalers, distributors, retailers) accounts, government accounts and end-user accounts. We really do have a diverse membership.

Diversity exists in one other important area as well, and that is how professionally … Read the rest

The phrase “out of sight, out of mind” might accurately describe the perception many people have of the water and waste water treatment industry. For Carl Janson, however, it’s exactly the opposite. For the president of Riordan Materials Corporation, water and wastewater treatment are a constant in his life and in the life of his independent rep agency.

The Blue Bell, Pennsylvania-headquartered Riordan Materials Corporation puts forth the following goal in its mission statement: “Our mission is to provide quality, cost-effective solutions for our clients, while providing the best technical support services available before, during, and after installation. We are … Read the rest 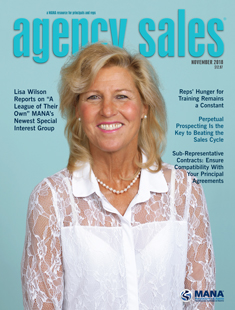 Late last year, Lisa Wilson was contacted by Agency Sales magazine to describe her efforts in spearheading a MANA special interest group for female agency owners called “A League of Their Own.” While that article in the November issue detailed Wilson’s efforts in putting female agency owners together to share and learn from experiences and best practices, there’s more to Wilson’s history as an independent manufacturers’ representative. Her agency, L.S. Wilson & Associates, Inc., Bristol, Wisconsin, specializes in motors, stainless steel coatings, surface preparation products and industrial cleaning solutions.

According to Wilson, her beginnings as an independent rep can be … Read the rest

I’d like to thank you for the article about me and my agency that appeared close to two years ago (April 2017, Agency Sales), which detailed how several of the manufacturers that I work with came to my aid during a lengthy illness. In addition to assisting me during a very difficult time, those same companies (Best Carbide, AB Tools, Inc., Vermont Indexable, Johnson Carbide, Wendt-USA, EZ Burr and Alvord-Polk) assisted me in the development of a product that was created during my rehabilitation. As the product reached completion, it’s interesting that in a strange turn of events, I … Read the rest

Most everyone has figured out that performance expectations keep going up. To put it bluntly, we face the challenge of doing more in less time. And it’s not about to change anytime soon.

In the past, those with lots of experience fared well, but not today. Experience can hold us back, like running against a strong wind. Experience is about what we’ve done in the past and it has value in a never-changing environment. On the other hand, expertise prepares us for what we must do next so we can face the future with confidence.

The question, then, is how … Read the rest

During a field sales call, top performers build rapport quickly. They ask the customers to talk about their operation and the reason they have interest. I call it finding pain. “If there is no pain there can be no … Read the rest

This is the fifth in a number of articles serializing The Sales Force — Working With Reps by Charles Cohon, MANA’s president and CEO. The entire book may be found in the member area of MANA’s website.

When Harold arrived in the conference room carrying a coffee cake, Jim was relieved. The mood as their last meeting ended had seemed a bit tense, but the pastry told Jim that Harold either hadn’t noticed or wasn’t carrying a grudge. Harold set the coffee cake on the conference table, and before he even sat down began slicing it with a plastic knife.… Read the rest

Years ago working with a chain of retail stores, I interviewed the salespeople. After a lot of talk with a lot of people I found out that they really hated to close a sale because the work they had to do after making the sale was so time‑consuming and difficult.

Why? One of the owners was very obsessive about details. He had provided a job description and list of tasks to the salespeople that meant that every sale was followed by hours of paperwork and follow-up.

In an article by friend and colleague John Brubaker (CoachBru.com), he stated, “According to a U.S. Department of Commerce research study, in the first five years of a business the survival rate for independent small businesses is less than 20 percent but the survival rate for franchises is 95 percent.”

He continues: “…it isn’t so much the name recognition… it’s the fact that with a franchise you get to utilize a turn-key set of business operations [a successful system that works] as opposed to having to invent the wheel in your own business.

“…Starbucks [has] an excellent system, which is … Read the rest

Even the most successful companies are in constant competition for business. What sets them apart often boils down to one factor…outstanding customer service.

I have spent 44 years focusing on customer service. I have written hundreds of articles, as well as seven books on the topic. I have also been interviewed on television and radio plus presented to thousands of customers with seminars worldwide. No matter what business you’re in, here’s some advice I highly recommend you consider.

Most firms in the world believe they provide awesome service. They are addicted to advertising and marketing using expensive media. The biggest … Read the rest

Being the biggest isn’t always the formula for success. That’s what one manufacturer maintained as he explained, “I know that I’m a small fish in a much bigger pond when it comes to getting the attention of successful reps.

“What has worked for me is that I’ve had great luck when I take a really close look at the other lines the manufacturers’ representative represents. After looking at the rep’s entire offering, I determine if there’s a void. What that void represents is a niche for me to fill. Once I identify that void, I’ll contact some of his other … Read the rest

There’s never been a shortage of books that come across the Agency Sales editorial desk. In a given month there will be any number of books, periodicals and articles devoted to entrepreneurship, salesmanship or the daily travails of the independent sales rep. That’s why it was so unusual when some of the contents of one book recently caught our eye.

Ostensibly, Eat Their Lunch: Winning Customers Away From Your Competition, by Anthony Iannarino, published late last fall by Portfolio/Penguin Random House (221 pp., $27), emphasizes the need for sales professionals to create and offer more value to their customers. … Read the rest

If the rep takes the time to read, understand, question, and yes, even negotiate the terms of a rep agreement at the start, there should be no surprises, and hopefully no problems, at the end. It’s the difference between fire prevention and extinguishing a raging fire. But, too often, reps belatedly learn that their multi-year contracts can be terminated upon 30-days’ notice, or that they won’t receive post-termination commissions, or that their principal … Read the rest

You contact or are contacted by an international company to represent it (or maybe you already do). You are joyful of the opportunity and you are anxious to handle the products that this principal has available and think it will be an easy opportunity to sell the products to the potential customers that you currently call on, or on a new market you are interested in pursuing. So you approach the potential principal and after some discussions your agency and the potential principal want to set up a meeting to see if a deal with you to represent it makes … Read the rest

There’s a story that’s told of an old farmer who had toiled in his fields for many years. One day his horse ran away. Upon hearing the news, his neighbors came to the farmer’s house to console him.

“Such bad luck,” they said sympathetically.

The next morning the horse returned, bringing with it three other wild horses.

“How wonderful!” the neighbors exclaimed.

The following day, his son tried to ride one of the wild horses, was thrown, and broke his leg.

Organizations like AIM/R are much more than a community of today’s membership. They’re a reflection of all those who have come before, helped build the group’s foundation and added layers of knowledge and experience along the way.

AIM/R wanted a way to formally recognize — and memorialize — all of those contributions. Several years ago, they established the AIM/R Hall of Fame and announced the inaugural group. Since then, 12 were added. And during the AIM/R 46th Annual Conference, SVP of Industry and PR Brian Morgan of The Morgan Group introduced Tom Tiernan, CPMR, and Gregg Marshall, CPMR, as the … Read the rest