Working Together So Everybody Wins

This is a true story.

Six non-competing manufacturers now have an informal alliance to share the cost and benefits of expensive resources that would be too costly for them to deploy on their own. Listing their products illustrates how these companies’ product lines fit the same market but don’t overlap, making it practical for each company to comfortably share resources with companies that are not its competitors.

And when one creates a best practice in, say, vendor managed inventory or bin stocking, each of the others will hear about it and have the chance to create similar programs.

How is such an informal alliance created and maintained?

These six manufacturers, and others, share the same outsourced sales force company, or manufacturers’ representative, to manage their sales in a particular territory.

In May of this year I participated in my first meeting as a member of the MANA Board of Directors. As the first female to occupy such a position in the association’s 70-year history, a number of thoughts went through my mind as I met with other Board members and MANA executives. The first thing was how gratifying it feels to give back to an organization that has given me so much. Also, how much I look forward to more women joining us at the table as we grow our association well into the future.

As we think about succession … Read the rest

Initiate a conversation on the subject of the how and why of representing principals that have no existing business in a territory and it’s inevitable that independent manufacturers’ representatives, prospective principals and business consultants will very quickly address the concept of shared territorial development fees.

Simply stated such fees are those paid by the principal to the rep during the period of time the rep develops business in the territory where no business previously existed.

The continued timeliness of the subject was proven when speaking with Hank Bergson, president of Henry Bergson & Associates, LLC, and the former president and … Read the rest

Manufacturers should be teammates with all their independent manufacturers’ representatives. When a principal wants a rep to take on their line and there is little or no business in the territory, it shows great respect when the principal offers to pay the rep — for a period of time — to pioneer the line. This is simply practicing the “Golden Rule.” The manufacturer would not expect to have one of their direct employees go to a specific territory to work to create business and then not pay that employee. So why would they treat a rep differently?

There are several … Read the rest

When the author of this article was asked to recall some of his experiences with manufacturers and customers, he was quick to cite a couple of instances that bore out the axiom, “No good deed remains unpunished.” At the same time, with more than 50 years under his belt as an independent manufacturers’ representative, he offers some valuable advice for his fellow reps. Read on to learn if any of his experiences sound familiar.

Here’s what happened to me. It was a number of years ago when I was calling on a major industrial manufacturer who consumed large volumes of … Read the rest

It’s easy to understand why so many otherwise capable people are distressed, anxiety-ridden, and almost paralyzed if they’re called upon to make a presentation — even to a friendly audience of three — let alone 300. They often reveal how they feel by starting out with “I only wish I had more time to prepare” or “I’m not really good at public speaking.” Unfortunately, what follows proves it.

It isn’t surprising that with successful presenters the story is different. We view them as possessing leadership capabilities, as well as being committed, competent, and rising stars. As … Read the rest

Rep firms exist for one reason — sales! Selling is the first, second and third activity of a manufacturers’ rep organization. But, too little time is devoted to the sales process, management of the sales force, and directing overall sales performance.

We know that the top salespeople in any sales organization are revered and in some cases, “worshiped.” But, the top performers can provide challenges for management. For example, Mr. or Ms. Number One might have some bad habits — like not getting expense reports in on time. But, the bookkeeper is afraid to challenge Number One … Read the rest

This month’s article is the second in a serialization of the author’s life and career as an independent manufacturers’ representative.

Reprinted with permission from The Reputable Rep, Success in Sales and Life, by Sig Schmalhofer.

If being a manufactures’ rep is a secret career, then plumbing is the secret business. 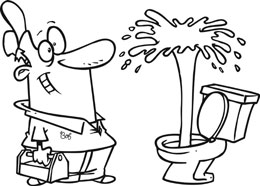 When the word “plumbing” comes to mind, most people think of the scenario pictured. They think about the guy who drags a drain snake to a home to unplug a toilet.

It’s seen as a nasty job that, unfortunately, somebody has to do. So, when I … Read the rest

We live in a very dynamic world. What we know now will not be good enough for the future and selecting people to move us forward and who are open to learning is what we need to focus on.

In my book, Moving Up, I tell readers it’s about your life — it’s about succeeding. It’s about taking chances, dreaming big, being proactive and being ready when the opportunity presents itself.

Steve Jobs stated that young people need to: “Think about what it is that you really want. Go ahead and put in the time and energy to learn … Read the rest

I was a national sales rep for 14 years before switching sides and founding or co-founding 16 start-ups, one of which made the Inc. 500 list three years in a row.

As a result, I feel qualified to speak on this subject which I think is misunderstood and not taught at school. This is why I’ve written Sales Reps: How Manufacturers and Reps Can Better Work With Each Other for Mutual Gain, a comprehensive and practical guide to help sales reps and manufacturers understand each other better, to create a positive partnership that will yield more profits for each, and … Read the rest

The year was 1947. Harry S. Truman was president, Chuck Yeager broke the sound barrier, and on October 17, 1947, the Manufacturers’ Agents National Association joined the community of not-for-profit trade associations.

To celebrate our 70th MANAversary year, each Agency Sales magazine through October will include a “blast from the past” article from the early issues of The AGENT and Representative magazine, which eventually became Agency Sales.

Once he had completed his due diligence regarding his company’s rep selection search, the national sales manager for one manufacturer was frustrated. He had narrowed his search to three independent agencies, but here was his problem — in his opinion they were all in a dead heat when it came to which one was most qualified to represent him in the territory in question.

Thankfully, this manufacturer had plenty of non-competitive manufacturer friends who weren’t bashful when it came to offering suggestions about how to break what was a virtual tie. According to the manufacturer, here’s one of the most … Read the rest

When you talk to successful business people, they inevitably tell you that it is all about relationships.

This has been true throughout time. It’s true today, and it was true way back in the bazaars of the Middle East centuries ago. People like to do business with those they know, like and trust.

To build success in business, you have to build quality relationships. This takes time, money and energy to do it right. More than anything, it takes the ability to listen to the needs of others and figure out creative ways to help them solve their problems through … Read the rest

With the improving economy and manufacturing activity on the rise, many reps and principals are entering agreements for new lines.

Although much effort is invested in developing relationships and securing new business opportunities, in the initial excitement and optimism, far too often important details of the representation are overlooked, which can cause major trouble down the road.

This article addresses three recurring contract situations and identifies some best practices for reps and principals facing those issues.

Best Practice # 1 — Set the Right Term (Length) for the Agreement