This month I answer that manufacturer’s follow-up questions:*

“Let’s say my rep Fred closes a major order at Acme Company and I give Fred LOP/LOP commission on that program. Later I replace Fred in that territory with a new rep, Nicole.

“When that program comes up for renewal, Nicole is managing negotiations for a reorder that is still commissionable to Fred due to LOP/LOP.”

Why Would Nicole Work Hard to Negotiate the Best Deal for Her Principal?

Nicole plans to write new orders with Acme and earn LOP/LOP commission on those new orders. Nicole knows that if she lets prices tumble on this reorder it will be harder to get a good price later when Acme’s next new project comes up. Maintaining a good margin now serves Nicole’s interests when she negotiates with Acme on the next project.

Of course, if the principal still has lingering concerns about Nicole’s motivation to maximize the selling price, the principal can always give this negotiation extra attention and oversight.

Why Would Nicole Work Hard to Keep This Project From Going Offshore?

Bottom line, most manufacturers would love to be facing a situation where they had so much business that managing quotes for reorders became a major undertaking. After all, you had to get the orders in the first place for reorders to be an issue. And getting orders is exactly what reps do best.

* The manufacturer’s comments have been edited for clarity and brevity.

When I owned my manufacturers’ representative business back in the last millennium, my principals wanted one thing from me — orders! Our members now tell me principals still want orders, but other activities as well — filling out online CRM reports, market research, succession plans, and more. What’s a rep to do?

Last year, I made a presentation to 20 roofing manufacturers’ representatives. During the Q&A, one participant asked, “Are principals asking MANA members to fill out online CRM reports?” I asked the group, “How many of you have principals who asked you to fill these out?” Half the hands … Read the rest

Time was that reps sold products and received a commission check. It was as simple as that and the arrangement seemed to suit both sides — manufacturer and rep. But times have changed and so have what each side expects from the other.

That scenario served as the beginning of a conversation with Craig Lindsay, CSP, CPMR, founder and president, Pacesetter Sales & Associates, an independent manufacturers’ representative agency selling safety and industrial supplies to the industrial market across Canada. As the conversation progressed, however, several variables were thrown into the mix and the relationship isn’t quite as simple as … Read the rest 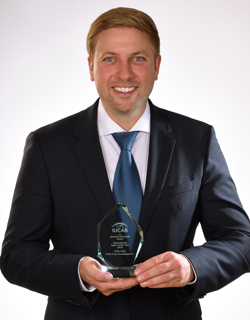 This year’s winner Peter Feigl, of Peter Feigl Handelsagentur in Austria, gave an extraordinary acceptance speech. With Peter’s permission, we are reprinting his speech in Agency Sales magazine:

My name is Peter Feigl, I am 40 years old and I’m from Linz in Austria. At the beginning of my working life, I made an apprenticeship as a mechatronics. Then I became a field manager. And now I am a … Read the rest

In his explanation for not renewing his membership, Melocik emphasized that “I did want to thank MANA for all that I have been able to learn from the organization and for the contacts that allowed me to pick up additional … Read the rest

Something has changed. It may be the effect of social media, or better banking regulations and procedures, or a deeper concern for business reputations. Whatever the impetus, manufacturers’ representatives like us now have better
options than slow-pay, no-pay or sue.

Every company occasionally confronts a client who doesn’t pay on time, refuses to pay altogether, or can’t pay the full amount for goods that have been manufactured and delivered. Like many of you, I’ve had clients take advantage of me as I struggled to build my business. Fortunately each bad episode always provided … Read the rest

Yesterday, a sales manager I was coaching asked me to explain the difference between a great question and a tough question. I gave him the one-minute version but this article has the expanded version of that answer.

I’ll use my world as an example and ask you to translate accordingly.

In my world, while I might occasionally be on a first call with a senior sales leader, I am most frequently speaking with the CEO. With CEOs, the most-common issue they articulate is “I’m not sure we have the right sales leader.”

I’ll just come right out and say it. I believe that treating customers fairly and equally is a mistake. It’s unprofitable. It belittles customers and employees, and it’s unethical. There, I’ve said it.

Certainly, we should treat people fairly — but not equally. I’m not advocating some Orwellian decree that “some animals are more equal than others.” This has nothing to do with a customer’s value as a person. It has to do with bending so-called “rules” to give exceptional customers the kind of unique service they deserve.

Lots of money, effort and time go into acquiring customers, but not nearly enough thought goes into keeping them coming back. Sure, there’s the occasional offer or the “We’ve missed you” discount. All too frequently, we don’t pay attention unless they’re unhappy or turn up missing. Then, we get busy and try to get them back.

Such business behavior has unintended consequences. The cable companies are an example. Customers have learned to complain and threaten to leave unless they are given concessions. And how do you feel when a company unleashes the sweet talk after they haven’t heard from you? … Read the rest

To be successful in the world of selling you need to be a contrarian.

In every industry, successful salespeople are the exception, not the rule. In the insurance field, only about 20 percent of the agents who start are still agents 10 years down the road. In real estate, the average realtor sells three houses a year, and even though some may stay in the business because it’s the family’s second income, and the company allows them to, three houses a year is poverty-level income. In the corporate world, most salespeople don’t make quota and in many cases, even those … Read the rest

I sell for a living. In our pay plan, we compete with our revenue numbers from the previous year, and approximately six percent is added to the previous year’s revenue number. That becomes your goal for that particular month. We get a salary plus commission and have a stair-step commission that starts at 80 percent of our goal. The problem is there is no motivation between the salespeople due to the fact that we are competing with numbers from the year before. When we have talked to management about it, they say that if we changed the pay plan, … Read the rest

Concurrent with the publication of an article on the importance of succession planning in Agency Sales earlier this year, a manufacturer wondered how far he could go when it comes to asking about an agency’s future plans.

According to the manufacturer, “Thankfully, I’ve been in the position where I really haven’t had to worry about what my reps are going to do in the future because, by and large, each of the firms I work with have been more than willing to share information that pertains to how they operate now and what their future plans might be. These are … Read the rest

Creating highly engaged customers is forcing companies to provide their customers with a consistent experience whenever and wherever they need it — digitally.

Did you know that highly engaged customers buy 90 percent more frequently, spend 60 percent more per purchase, and have three times the annual value (compared to the average customer). That’s a huge revenue opportunity you could be taking advantage of by digitally transforming your business!

But, in order to deliver on a better customer experience, you first need to understand who this new kind of digital customer is and what they want. It’s clear that the … Read the rest

In the investment world there’s usually a large chasm among stock market forecasters about the future direction of the stock market.

The “Bulls” point to the recent tax cuts, earnings and other far-off ideas emanating from their Ouija boards. The “Bears” point to the volatility, retail woes, future interest rate hikes, and political uncertainty, among other things. And again, as always, the investor is left trying to separate wheat from chaff.

With this scenario as a backdrop, I thought it would be useful to share one of my favorite fables. 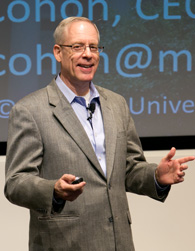 MANA CEO Charles Cohon is an invited speaker scheduled to be with some of the best reps in the plumbing industry in Napa, California this fall for the Association of Independent Manufacturers’ Representatives (AIM/R) 46th Annual Conference. Cohon’s presentation, The Quick and the Dead, focuses on the urgent need for reps to be agile in today’s challenging business environment.

“It’s a special treat for me to be with my friends at AIM/R,” noted Cohon, “because every AIM/R member also is a MANA member!”

This Annual Conference is “the place to be” for professional, independent business owners to learn, share, … Read the rest

For many years, NMRA has enjoyed a close working relationship with MANA and regularly offers its members access to its SalesWise business development training and coaching teleforums. The organizations frequently collaborate on projects and co-presented a past IBEX workshop.

“We want to provide our members with the best possible benefits,” said Neal Trombley, NMRA president. “This is an exciting development that promises to have a significant impact … Read the rest