Yes, you can find MANA’s announcement of its new president on page 105 of Billboard magazine. In all fairness, we should note that you should not search for this article in the current issue of Billboard. You’ll need to search Billboard’s back issues for the June 19, 1948 issue, when that magazine was still The Billboard. (To view that entire The Billboard article online, use the search term: “Richard A. Wilcox” MANA.) 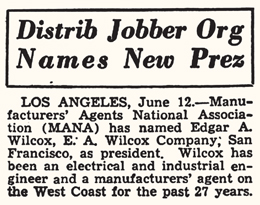 Why the sudden interest in MANA’s ancient history? Because MANA’s 70th anniversary is coming up in October 2017. And while I’ve spent my first five years as MANA’s CEO looking diligently and aggressively toward MANA’s future, our upcoming 70th anniversary has reminded me to spend a little time looking at our past.

A search of our archives has revealed the first issue of The Agent and Representative magazine, dated July 1949, so this June 1948 Billboard article is the earliest reference to MANA we’ve found in print so far. If you have something older in your files, we hope you’ll share it.

We will continue to include more and more nuggets from MANA’s past as our October 2017 anniversary approaches, but for now I’d like to close this MANA editorial with an excerpt from MANA’s very first editorial, penned for that July 1949 issue by MANA’s then Executive Secretary P. Edwin Thomas.

Rightly or wrongly, the post-war American interest is tightly linked to the welfare of half the whole world; although, even if we wished, we are not rich enough to endow the world, or powerful enough to rule it. Instead, being what we are, we can only strive to create, and work to produce, the conditions that make for freedom and peace among nations, being careful to keep ourselves solvent in the gigantic process.

But this condition, this American world interest, demands a new look at the needs of the domestic welfare of our own people, in pure terms of dollars and cents alone. For, somehow, the cost of all items, the cost of everything we need and use, must be lowered to a point within the means of each and every one of us — the means remaining after all the multifarous and multitudinous tax burdens have been borne.

Among these are the lowering of selling costs, and that is where agents and representatives come in.

So really, as a MANA rep member what has MANA done for you lately?

Well, you get the iToolbox e-mails, and with each month a new Agency Sales magazine arrives. Good stuff. Oh, and there are the legal resources, consulting services, contract guidelines, videos, webinars, educational programs and discount programs. And yeah, MANA is the driver in getting commission protection laws put in place. Maybe through MANA you have landed a line to represent every now and then?

When he’s asked to reflect on his career as an independent manufacturers’ representative, Steve Williston immediately draws on the words “journey” and “adventure” to describe how he got to where he is today.

Williston maintains that it’s those two words that best describe what he’s seen and experienced since first being exposed to what his father, the late Jerry Williston, chose for a career, to the point where today he finds himself heading S. Williston Sales Co., LLC, East-Greenwich, Rhode Island.

Williston maintains that “A journey can be defined as a long, often difficult process of personal change and development. … Read the rest

In describing how and why he opened his agency’s doors in Northern California years ago, Danny Dodge notes that “I opened my agency with no lines and no customers, but I knew how to sell.” Today Dodge heads the single-man agency Component Solutions, LLC, in Alamo, California, and since he’s successfully weathered changes in the marketplace not to mention changes in the product lines that he represents over the course of his agency’s 20-year history, he obviously still knows how to sell.

Whether you are purchasing in the individual market or the small group insurance market, The Affordable Care Act (ACA) has changed how you purchase health insurance. As time goes on, market changes spurred on by the legislation make the process even more complex.

The ACA desired to make things easier for the public by categorizing individual and small group plans into four major categories, Platinum, Gold, Silver and Bronze. Each metallic level suggests that plans found within a category could be considered to be of equal actuarial value. We are to believe that the benefits within a category are simply … Read the rest

Some facts about sales follow-ups:

Follow-up is the most important sales activity you need to do and must be done properly to succeed because:

We have said it many times, but every experience with successful independent manufacturers’ representatives causes a repeat — you have to work on the business!

Getting outside the everyday “stuff” is absolutely critical. Knowing that you are going to have 5-10 hours a month to work on the business is vital. Being sure that those hours are made priceless is key. Nothing else about your life can interfere with your time to think!

Thinking about key elements of your business is the best possible way to keep the business on track and your mind centered on staying successful.

What to … Read the rest

Last month I made the point that thinking better is the ultimate success skill for a salesperson, and that good thinking always came from asking yourself the right questions and writing down the answers. Sounds so simple. Yet, only a handful of true professionals adhere to that discipline.

The personal effectiveness questions that we reviewed in part one are based on the premise that you can choose to do things that are more effective than others. You have a choice of how to invest your sales time, and you make those decisions about that investment … Read the rest

It’s amazing. So many salespeople with great potential either drop out or have limited success. Most have good skills, possess the right attitude, and want to get ahead. But something holds them back.

What are they missing?

Simply put, they don’t know the rules for getting to the top. Here are several rules that will help get the job done:

The world has changed and the message for everyone is fast forward. Wells Fargo’s FastFlexSmall Business Loan program tells the story. Online and funded as quickly as the next business day, there are no meetings with a … Read the rest

Scary thought, right? Why? Because you know within three to five years they’d own 90 to 100 percent of the business in the area and if you weren’t out of business, you’d be hanging on by a shoestring. There are several reasons why this group, even with no prior experience in your industry, and even without their celebrity status to rely on, would absolutely dominate your market. Here they are.

Reason #1: Completely unreasonable, some might even say insane, commitment

If you called their business at midnight on Saturday, how long do you think it would be before you spoke … Read the rest

Following an internal reorganization, which included revamping the company’s sales effort, one manufacturer noted an immediate problem. “The first thing we saw was declining sales. Once we looked into the situation, we found that our reorganization had placed too many people in too many different positions. Our direct salespeople began to lose contact with their customers in the field.

“We had a history of working with independent manufacturers’ representatives several years ago and I’ve got to admit the experience was positive. We made a change to a direct sales force when new management took over our company.”

He continued that … Read the rest

With all the new technologies bombarding us every day, it’s become more difficult to decipher a steady path for not only companies but individuals to see what’s ahead. How do we guide employees through this new technology and look for the competitive advantage? How do we create a platform for excelling at different levels in companies to ensure success and endure the growing pains we all have to go through to get to the next step? How do we compete?

As our understanding of the makeup of humans increases, so does our ability to create opportunities to improve our performance … Read the rest

This is the first of two articles covering the subjects of restraint of trade and trade secrets. The second part, which will appear in the November issue of Agency Sales, examines trade secret protection.

“Legally Speaking” articles in Agency Sales magazine have often emphasized the importance of carefully crafting the terms of independent sales representatives’ contracts with principals to avert any number of potential problems. Where possible, reps should use their own terms of agreement. But realistically, principals often want to impose their own terms. Reps naturally focus on the commission terms, territory, and exceptions such as house accounts … Read the rest