“Two possibilities exist: either we are alone in the Universe or we are not. Both are equally terrifying.” — Arthur C. Clarke

How powerful? The international association that counts reps worldwide reports that the 42,000 reps in North America are part of a worldwide ecosystem of 537,000 reps.

Engaging in a worldwide ecosystem is very important to MANA members.

MANA’s participation in the Internationally United Commercial Agents and Brokers (IUCAB) gives MANA access to just the kind of exposure and information MANA members need to flourish internationally. (Outside of North America, what we call manufacturers’ reps are referred to as commercial agents.)

As a member of IUCAB’s Executive Committee MANA plays a critical role in the IUCAB. I recently met in Hungary with other Executive Committee members (pictured above) from the rep associations of Austria, France, Germany, Italy, Norway, and the United Kingdom to work on strategies to promote reps internationally.

Through IUCAB, MANA engages with 18 other countries’ rep associations in Europe, North and South America, and insures our place at the table in the international community of reps. 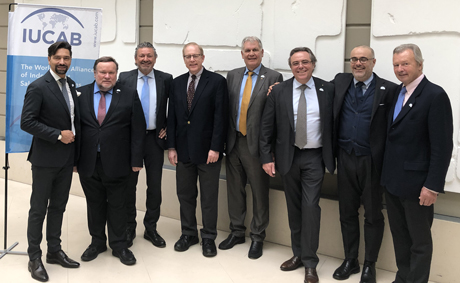 Are you hitting your target results for sales, business development, and career aspirations? Hopefully you’ve built out a clear process and are right on track to hit the results you are aiming for.

However, if the answer to that question is “No,” chances are you lack an essential ingredient needed for the continued success of your business.

Contrary to the oft-quoted saying, “Curiosity killed the cat,” curiosity about yourself, your business, customers, business trends, etc., allows you to anticipate challenges and opportunities. That anticipation allows you to stay more than one step ahead of the competition. It could even open … Read the rest

When an oft-quoted French phrase appeared in the opening pages of a New York Times best-selling novel late last year, MANA-member reps and manufacturers were quick to voice opinions that lent credence to the more than 150-year old saying.

Just so the reader doesn’t have to translate from the French, “Plus ca change, plus c’est la meme chose,” in English means, “The more things change, the more they stay the same.

How does this saying apply to the shared world of reps and principals? First up with his thoughts is Michael Roemen, the independent sales rep manager for 9Wood, a … Read the rest

Uniquely positioned to offer his thoughts on how things change — yet remain the same — is Hank Bergson.

For several years Bergson has moderated MANA’s manufacturer seminar, “Best Practices With Reps, Planning With Intent.” The day-and-a half session is aimed at educating manufacturers as to the most efficient ways to work with independent sales reps. In addition, he comes well-armed to advise manufacturers on the ins and outs of working with reps given his years of service as the president of the National Electrical Manufacturers’ Representatives Association (NEMRA).

Millions of us wake up one morning to the haunting realization that we’re losing the battle to avoid becoming obsolete on the job.

It affects those in their 20s, while others don’t see the darkness descend until they’re much older. Some are high school dropouts, others are college graduates, or successful professionals. It can strike anyone.

Oxford researchers Carl Benedikt Frey and Michael Osbourne, according to a USA Today article, estimate that “forty-seven percent of American jobs are at high risk of automation by the mid 2030s.”

Some may run faster or be in denial, but Steve Tobak got it … Read the rest

Let’s say we ask this question of the typical sales rep: “Is it important to build a relationship with your prospect in order to make a sale?”

Answers to that question vary but they ultimately sound more or less like these:

There seems to be a cliché among sales trainers these days, and that is: “Sales isn’t a numbers game.”

I believe most sales trainers are saying that for shock effect and to sound different and controversial. I also believe they are saying that because they think that’s what salespeople want to hear. The reality, and what salespeople need to hear, is that sales is and always will be a numbers game. It’s simple, the more people you talk to, the more business you will do, even a blind pig finds corn. In other words, if you talk to enough people … Read the rest

What can your customers do for you?

Yes, “What can your customers do for you?” This was the question I posed to several independent manufacturers’ reps, manufacturers and distributors in preparation for a recent seminar titled, Dealing With Vendors. Most had a difficult time answering. Why? Because the focus is generally down the distribution channel, asking what else can be done for customers. Rarely, is it reciprocal that customers ask what they can do for their suppliers. So much profit, or discounts, depending on your side of the negotiating table, is being squandered.

At a certain point, … Read the rest

Sports bloopers are often about preventable errors that favor the other team. The classic is when players score against their own side.

In the world of business, there are similar blunders — particularly during buying conversations with potential customers — that end up favoring the competition. As I explain in my seminars for sales teams, it’s not always a shortfall in your company’s product, price or service that ruins a potential sale. Often it’s inadvertent comments that put customers off just enough for them to choose your competitor. Unfortunately, sales reps are usually unaware they commit these offences so they … Read the rest

This is the 17th in a number of articles serializing The Sales Force — Working With Reps by Charles Cohon, MANA’s president and CEO. The entire book may be found in the member area of MANA’s website.

“As long as you brought up finances,” said Ruth, “let’s discuss that for a minute. Jim, getting the feedback you want probably is going to have some sort of cost associated with it. You’ve been talking about some sort of a commission-based system that doesn’t involve the current sales force, which means you will end up paying some percentage of sales to somebody. … Read the rest

Empowerment means every employee has to make fast decisions in favor of the customer at every single encounter.

Mistakes are inevitable and it’s important to recognize and accept this fact of life. The only way we can do that is by empowering employees to satisfy the customer quickly and to their satisfaction.

Empowerment Is the Backbone of Customer Service

I have stated in my books and in my seminars that it’s impossible to be a service leader, to be customer centric and focus on a service strategy without empowering employees. My definition of empowerment is giving employees the authority to … Read the rest

In general, benefits cited include:

Those benefits aside, a couple of posts on MANA’s LinkedIn discussion page show how some reps view their principals’ visits to the field.

Opening a conversation on this very subject, one rep maintained that “I only let them (manufacturers) come when we have something important pending with a customer. Other than … Read the rest

Competition is all over the place these days! Whatever field you’re in, there are competing forces offering your product or service, or a good substitute. Price competition is often the way many choose to beat the competition. That is not the best way to compete. There is a much better, and more profitable way to do business.

It wasn’t that long ago that many would joke about their “crackberries.” These were the ubiquitous Blackberry cell phones that many joked they were addicted to like a crack addict. Many felt that the Blackberry brand, for texting and calling, would always be … Read the rest

Author’s note: When our firm is contacted by a rep whose contract has been breached, overwhelmingly the principal in question is not a MANA manufacturer member.

Option 1: Trying to get the principal to retract a commission reduction or sign a more protective contract

This may be useful in situations where the principal could be liable for the payment of long-term sales commissions, based on either the Procuring Cause Doctrine, a violation of the Covenant of Good Faith and Fair Dealing; … Read the rest

Below: A highlight for many attendees was the session on rep councils presented by MANA Board Member Charlie Ingram, who is executive vice president & chief marketing officer of Eriez Manufacturing Company. 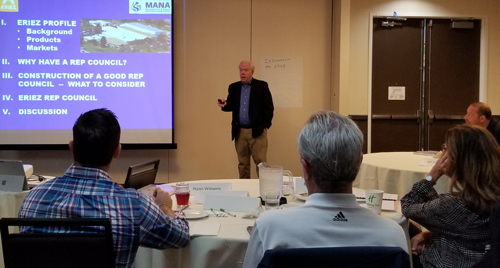