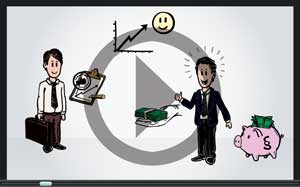 It’s a common complaint among reps: “Nobody understands what I do.”

And the complaint is driven by more than simple justifiable pride in the reps’ role in their countries’ economies. For the rep system of selling to thrive, the business world needs to universally understand the rep function.

Who are some of the people who need to understand what a manufacturers’ rep is, but don’t?

It’s a challenge to explain the rep function quickly, insightfully, and completely. Or it used to be a challenge. Until now.

MANA is proud to announce a new two-minute-and-nine-second video just posted at www.MANAonline.org that explains the rep function better than any tool we’ve ever offered. It’s such a great tool that we wish we could take full credit for it ourselves, but the lion’s share of the credit belongs to MANA’s Austrian counterpart, The Federal Association of Austrian Commercial Agents, and video production company SimpleShow.

The Federal Association of Austrian Commercial Agents collaborated with SimpleShow to craft an entertaining, informative video for European audiences that would make the rep system of selling easy to understand. And when they screened the video to an enthusiastic crowd at the Internationally United Commercial Agents and Brokers (IUCAB) conference in Austria in May, they graciously invited any other IUCAB member rep association to adapt the video to their own countries’ practices. We were excited to have the opportunity to take their video and “MANA-ize” it, so we reached out to SimpleShow and collaborated on a version for the North American market.

Share this video with your principals, colleagues, family and friends, and they will quickly understand the rep system of selling. It’s crisp, entertaining, and informative, and we thank The Federal Association of Austrian Commercial Agents so much for the opportunity to build on their hard work.

P.S. MANA members of long standing may be able to guess why the protagonist of our video is named George. The late George Hayward was the MANA Director who spearheaded MANA’s relationship with IUCAB. With permission from George’s son, current MANA Chairman of the Board Tom Hayward, we named our video’s protagonist to honor George’s memory.

Sales agencies and principals rely on each other, and our mutual growth is intertwined.

Our mutual dependence is obvious for some but not so for others. There cannot be one winner and one loser when it comes to our contracts. The whole purpose of the agency principal relationship is for both parties to succeed and grow in a mutually profitable manner while servicing our mutual customers’ needs. Getting to a win-win contract takes an open mind, a willingness to learn from each other, the ability to accept and understand each other’s needs and then turn all that into a mutually … Read the rest

While there appears to be no one way to engage in negotiations between independent reps and principals, there are a few words that both sides would be well-served to keep in mind while working on the terms that will build the foundation for long‑term relationships between the two. That’s the opinion of manufacturer Charles Ingram and rep John Aiello when they are asked what their mindset is when they square off to negotiate with someone on the other side of the desk.

Among the most repeated words they use to describe the process they’ve engaged in over the years are: … Read the rest

Throughout my career I have had the opportunity to work with all types of organizations, both for profit and non-profit, and noticed a common theme of poor leadership. Specifically, I have found that few organizations communicate or illustrate a vision for their employees and constituent groups. Even fewer have identified those strategic initiatives that will bridge where they are today with their vision or desired future state. And even fewer have a plan to properly resource those initiatives to transform their organizations.

The term “human resources management” is essential in business. But have you noticed that the majority of the literature about the topic focuses on the “resources” and the “management” aspects but barely addresses the “human” element? As a result, most managers see their employees as resources to be managed, and not as a whole person that can contribute so much more.

Managing the whole person means acknowledging that everyone is multi-dimensional and has numerous roles to balance in life — all of which affect job performance. However, this goes much deeper than simply work-life balance. It’s about recognizing all aspects … Read the rest

Marketing is too important to be left either to marketers or CEOs — but for different reasons.

Much of marketers’ energy goes into what is popularly known as self-marketing; that is, landing the next marketing gig. If you don’t believe it, take a trip through LinkedIn, where self-promotion among marketers is brazenly and shamelessly transparent.

Marketing is also too important to allow company CEOs (or anyone else of that ilk) to get their hands on it. Inevitably, they will try to shape it to fit some notion they have inside their heads. And it will be wrong. Look no further … Read the rest

Last month we looked at the groundwork necessary to land that big account and how to get the attention of key people at the account. Now that you have all your ducks in a row, how do you land the account?

If you’ve taken the steps I wrote about in the last article in Agency Sales, you’ve either already met the key people at your target account, you’re on their radar screen, or you’re well on your way to both. At this point you need to … Read the rest

Have you ever wondered why you seem to hit it off right away with some people, while with others it’s more like oil and water? A person’s temperament style not only determines his or her energy level, behavioral traits, body language patterns, and buying style, but it also influences compatibility with other people.

The yin and the yang, the ancient Chinese symbol for balance, depicts the strong attraction and complementary nature of opposites. Just as oil and water repel, while magnet and metal attract, we too are attracted or repelled by other people instinctively. For example, each of us have … Read the rest

All business owners want more customers. The question is how do you attract them? Advertising can be expensive and traditional marketing techniques may take a long time to show results. Fortunately, there is another option.

Did you know that as a business owner or professional in your field, you are also an expert? And, did you know that people (e.g., potential customers) want to learn from experts? That’s why it makes sense for you to share your knowledge by conducting informative presentations in your area of expertise.

Before you let your self-doubt creep in and proclaim, “But I’m not a … Read the rest

Early in Karl’s career, he had no problem accepting a technical promotion from junior technician to senior technician. When asked to be a supervisor, self-doubt became his constant companion. He agonized over the decision for days. He had trouble sleeping at night and concentrating on even the simplest tasks. Finally, with the support of his family and co-workers, he reluctantly took the promotion. Five years later, he has been asked to apply for the department manager position, where he will have to manage a hundred employees, including other supervisors. Self-doubt has returned, and he is extremely anxious about the unknowns … Read the rest

“Businesses struggle to fill sales positions as economy picks up.”

The above is the headline from an article that appeared in USA Today earlier this year. The article detailed the woes of manufacturers who are faced with replacing the sales force that they downsized during the economic downturn.

Drawing from a number of interviews, the article maintained that “The American salesperson isn’t dead, but he or she is getting harder to find.” That situation resulted from the fact that as the economy improved, employers are facing a situation where there’s a shortage of qualified salespeople and managers, and that’s hampering … Read the rest

Investing in marketing campaigns can be a nerve-wracking decision for many small- and medium-sized businesses. CEOs and marketing directors know that when you have limited resources, you must be strategic with your budget, and every marketing investment has to pay off.

This is why social media campaigns tend to be the first thing cut. Although free to set up, they take valuable staff resources to manage, and the ROI is not as apparent. While launching a social-media campaign likely won’t bring leads and sales pouring in your door tomorrow, when you implement a few social-media success strategies, you’ll find it … Read the rest

Many of our sales representative clients initially give very little consideration to the perceived “boiler-plate” clauses that appear near the end of their principals’ “standard” sales representative agreements. Their focus is on the granted territory, the commission rate, designation of house accounts and similar provisions which all reps deem of most importance. Nearly every sales representative agreement that I have seen contains an indemnification clause; but often the sales rep has not even read it, considering this clause to be just another unimportant “boiler-plate” provision. We counsel our clients that such perception is false. The existence and scope of the … Read the rest

When it comes to stock brokers pushing mutual funds and investment advisors pushing those same mutual funds, the feeling is definitely not mutual.

OK, that’s a serious overuse of the word “mutual,” but I feel it’s in your best interest as a responsible investor to know the difference between the two worlds of selling mutual funds. And you may be surprised at what you discover.

A few weeks ago I had a very interesting conversation with a colleague, and he shared this story with me.

Watson sits on the endowment committee for his local church in Cleveland, and they work … Read the rest