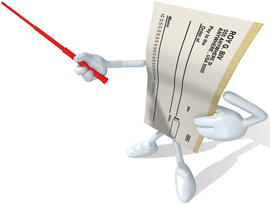 Part one of “The Blank Check” appeared in our last issue. Just to recap:

The early morning caller was a manufacturers’ representative. He sounded panicky, and I quickly discovered that his panic was justified.

“About 15 years ago I signed a rep agreement with 30-day cancellation terms. And for 15 years I kept growing that principal’s sales, and never gave it another thought.

“Yesterday I found out that I’d been terminated and that all the commissions I would have received for customers I’d closed over the past 15 years will end in 30 days. This is my #1 line and it’s 50 percent of my income. What can I do?”

In our last issue we discussed a manufacturers’ representative’s options for that principal. We also promised to suggest ways to try to negotiate extended post-termination commission into contracts that have already been signed but have not yet been terminated.

Is that really possible?

Yes, there are occasionally brief windows of opportunity when you can get improved terms written into existing representative agreements. But they generally occur only after a manufacturer has given you other bad news, and that window may be open only for a few days.

If an attorney’s review of your agreement doesn’t reveal any ways to get that unwelcome change reversed, don’t give up. Instead, negotiate for something else to make up for what you’ve lost.

Remember, if you have to give something, try to get something. A manufacturer who originally hired you for your negotiating skills shouldn’t expect anything less!

* Your legal recourse for a signed blank check may be better than your recourse for a badly written contract. This column is not legal advice; for definitive information, consult your attorney.

I am used to putting ads in a local paper and seeing what comes of it. Yes, I just gave away my age. The problem today is trying to figure out which website or app will best apply to sales and what I particularly need.

Job posting or posturing has become very hard in many ways. A job was posted here at my facility many years ago for an internal salesperson. The most shocking response was from the Ph.D. in engineering — clearly a stop gap from what we do here.

So where do we find people today? Where is … Read the rest

Agencies’ quest to locate and hire competent and hopefully successful outside salespeople remains a constant. If there was any need to have a reminder of the importance of that ongoing process read the interviews with agency heads that appear in this issue of Agency Sales. At the same time, it’s worthwhile to take a look back almost 10 years to an article that appeared in this publication (May 2009) entitled “In Search of the Right Salespeople.”

In that article, Mike Norton of AxiomOne, a company that provides diagnostic and evaluation tools to assist in the hiring process, detailed some … Read the rest

As Kurt Kroemer and his partners in CEP Sales Inc., Zionsville, Indiana, looked to the future, what they saw was a good deal of uncertainty. “Faced with the prospect of half the sales force anticipating retirement in the next couple of years, not even counting what plans I might have, we had to make some decisions. One of the decisions we could make was to simply do nothing and just let the agency peter out. Another path we might take would be to try to sell the agency to someone. The latter course obviously takes a great deal of planning

Jerry Ballard offers that he’s happy to share his thoughts on the process of hiring salespeople for his agency and communicating what works and what doesn’t work. “I’ve been hiring and training salespeople for 40 years. I get a little better at it with each mistake I make. I could write a book on my mistakes, but only a pamphlet on my successes.”

Ballard, who heads Energy Equipment, Inc., Midlothian, Virginia, explains that “We have two rep lines and 10 specialty distributor lines. To be successful with our distributor lines, our outside salespeople have to think like a manufacturers’ rep … Read the rest

A real-world guide to data sharing for reps and manufacturers.

I think we can all agree reports can be useful. Visibility, benchmarks, sales numbers — you name it. There’s a lot to be gained from effective and accurate reporting. There’s intelligence to be gained and strategies to be formed.

But time in front of a spreadsheet is time away from the road. Manufacturers want numbers. Reps just want to sell.

Well, You Can Start With the IRS

After all, a manufacturers’ rep is an independent contractor. And performance requests, … Read the rest

Think Your Way to Success

There are plenty of people in the workforce who do “something,” but not so many who do what needs to be done. And this is both a problem and an opportunity.

Success depends on being among the few others count on to get the job done right — and that takes thinking. Here are questions that can serve as a guide to thinking your way to success:

What if I’m trying to force it, attempting to make it work — and it isn’t? Most of us tend … Read the rest

Pat was not happy as she left the meeting with a long-term customer, or should I say, former customer.

“Pat, we have done business together for a long time,” her customer started, “but we have decided to go in a different direction this time.” The customer went on to say how ABC Company, one of Pat’s biggest competitors, worked with them to integrate ABC’s solution into the customer’s systems, resulting in faster inventory turns with fewer shipping errors, and they were able to demonstrate how this will increase margins and profit for the customer.

Customer service is all about listening. According to Bernard Ferrari, author of Power Listening: Mastering the Most Critical Business Skill of All, good listening is the key to developing fresh insights and ideas that fuel success.

Organizations choose front-line employees for their social poise, their outgoing personalities and their ability to communicate well, meaning their ability to talk well. And they train them in what they can and can’t say and what they can do to help the customer. Finally, their performance is evaluated by how proactively they manage and resolve problems or calls.

It isn’t hard to understand … Read the rest

This month’s article is the eighth in a serialization of the author’s life and career as an independent manufacturers’ representative.

Reprinted with permission from The Reputable Rep, Success in Sales and Life, by Sig Schmalhofer.

The reputable rep, like the distributors and contractors in his market, has both a financial and personal interest in the people he or she does business with. Reputable reps can be the glue that cements factory-customer loyalty.

In theory sales is pretty simple: communicate the right way with the right people, and you’ll make sales. It’s in practice that most people complicate the issue. So how do you keep it simple?

Assuming you’re selling something where someone has to deal with you for any length of time, in other words, you’re not selling batteries at Walmart, you need to get several points across:

That said, effective communication begins with mindset. First, you must be completely sold on and have confidence in … Read the rest

There’s a common refrain heard among manufacturers that they’re not getting enough of their reps’ time.

Meeting that concern head on, one manufacturer admits that he hears remedies from his peers that run the gamut from paying higher commissions, to providing more support to reps, to increasing joint sales calls in the field. Here’s what he’s done for himself that seems to work pretty well: “I share the same concerns as other manufacturers, but I counter that by making fewer demands on my reps’ time. But when I do contact them, I feel it’s fair to expect their attention. For … Read the rest

Late last fall a lunch with a MANA member brought the following request: “If you see something wrong with my website, please let me know about it.” The request was made when conversation turned to the subject of web page content and presentation. The concerns that surfaced during that lunch recalled an article that appeared in Agency Sales more than a decade ago entitled “Your Website Bites!”

That article pointed out that with some notable exceptions, independent manufacturers’ representatives haven’t harnessed the potential of the Internet to serve the interests of individual firms — nor have many steered visitors to … Read the rest

Continuing a discussion on how a sales rep might recover post-termination sales commissions under a terminable representation agreement, and having previously discussed Procuring Cause, I turn now to Bad Faith (BF).

A claim for BF in a principal-agent relationship will be more readily available. First, because there are fewer limitations on bringing such a claim, such as the limitation on a PC claim if the contract at issue addresses post-termination commission rights. With a claim for BF, a principal may follow a contract’s termination provisions to a tee, but a claim for BF may still be a winning … Read the rest

In December the Manufacturers’ Agents of Cincinnati (MAC) had their Christmas luncheon at the Montgomery Inn with 50 MAC members and featured guest Molly Wellmann of Wellmanns Brands. Wellmann is a self taught Mixologist who has become a partner of five bar/restaurants in Cincinnati, Ohio. Her passion for the bar business is unparalleled and she demonstrated that her customers come first. She talked about her path to success as an entrepreneur in her field. She has won many awards, has written a book and has done many local TV commercials for the city she grew up in — Cincinnati. Wellmann … Read the rest

The Association of Independent Manufacturers’/Representatives, Inc.(AIM/R) honored Scott Edwards of Armacell as their recipient of the 2017 Golden Eagle Award. The presentation was made before a record crowd at AIM/R’s 45th Annual Conference in Seattle, Washington.

The Golden Eagle Award is presented annually to an individual in the manufacturing sector that demonstrates the highest level of professionalism in their interaction with independent manufacturers’ representatives. The award was presented by Charlie Parham, VP of industry and PR for AIM/R.

Founded in 2000 following a management buyout, Armacell has successfully developed from a small division of Armstrong World Industries in … Read the rest