My father, Harold Cohon, a retired manufacturers’ representative who celebrates his 91st birthday this month, served in the U.S. Army during World War II. In 1943 basic training brought him to Death Valley in eastern California, and we recently came across this photo he took at that signpost. 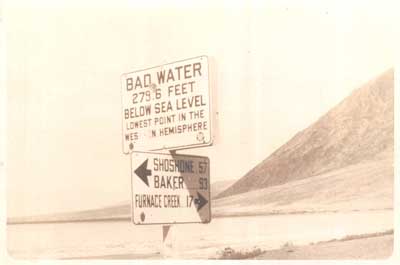 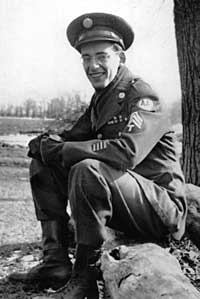 What Dad and most other people didn’t know is that Death Valley wasn’t really dead at all; it was just waiting for one final ingredient to show exactly what it was capable of.

It turns out that the earth in Death Valley is nutrient-rich and well-mixed with dormant seeds of flowering plants, all of the elements needed to support a vibrant ecosystem — except for one. Unknown to Dad, Death Valley was just waiting for water to show its amazing potential.

That potential revealed itself in 2005, when six inches of rain fell suddenly on Death Valley. Just as suddenly, this super-desert burst forth with an amazing variety of multi-colored flowering plants. Then, gradually, the water from that fluke rain evaporated. The desert dried up again, the plants died, and Death Valley went back to being the parched, cracked wasteland my father still remembers.

An otherwise well-run manufacturing firm can be just like Death Valley. If all of the elements of a thriving ecosystem exist except one, nothing blooms. It is not a coincidence that the most successful manufacturers’ representatives are called rainmakers.

When professionally executed sales calls, like the rain, are added to the mix, a commercial ecosystem can thrive.

And removing that rain can destroy that thriving ecosystem, turning it into dust that will quickly blow away. A reminder that the excitement over harvesting a single, unexpected, wildly successful bloom should not be taken as a cause to fire the rainmakers.

How about the representative owner who says he just can’t make any money as a manufacturers’ representative because his overhead and manpower costs were just too high?

All of these questions apply to deciding when a representative should hire an additional person. This is a tough decision whether you are a single person representative firm or have 20+ employees. You know that the additional … Read the rest

Steve Timura is at that point in the life of his agency that he’s contemplating growth. As he states it, “I have been a rep for just a little over a year now. I finished my first year ahead of my projections. During that time, I kissed a lot of toads to find good principals. I still have a couple teetering, mind you. I have a pretty large territory to cover and really need extra people to help me do so.” He goes on to say he’s interested in learning from others just what his numbers have to be in

The major product that independent sales representatives sell is selling. Remember agents are professional salespeople. They spend 100 percent of their time and effort selling products manufactured by their principals.

The question about the quality of selling by the agency’s salespeople is very relevant. How good is the product that they sell?

There is little question that most of the more senior people in agencies are good — if not great — salespeople. People who have lived by their selling wits for 20-30 years selling in whatever industry the agency is in are generally pretty good salespeople.

Could they be … Read the rest

If you’re like many of the business owners, presidents, or sales leaders I’ve worked with over the past 25 years, a review of the “numbers” at the end of each month, quarter and year leads to two questions.

Employment is on the up side. Employers are actively looking. Offers are getting better. Even so, many find themselves “stuck” where they are with no light at the end of the tunnel. Getting ahead eludes them; knowing how to make things happen isn’t easy.

Keeping your fingers crossed that a rising economic tide will take care of you or that your luck will change is, to put it bluntly, naïve, or stupid. You have better odds at the lottery.

This may sound pessimistic. “You have to stay optimistic,” some will say. It sounds good but it won’t get you where … Read the rest

Any independent sales agency that describes itself as a “Marriage Counselor for Manufacturers” had better be good. Well, that’s what JD Technologies, LLC, does — and they are just that — very good at what they do.

Here’s what the Middleton, Massachusetts-based agency does: Provides sales and marketing services to a group of high-quality, complementary manufacturers of engineered services and products who serve the industrial, aerospace, military, defense and medical industries. The agency develops long-term relationships with key customers who value the consultative style of selling. The company’s focus is on the six New England States that include Connecticut, Maine, … Read the rest

If you’ve been in sales for any length of time, you have more than likely experienced the ebb and flow of prospects in your pipeline from time to time. We all know there will be certain days, weeks, and months that are heavy with appointments, servicing of accounts, and other items that make it difficult to find time to prospect. That said, here are some ideas to ensure that you always have plenty of prospects in the pipeline.

How to Always Have Plenty of Prospects

Even on your busiest day, you’ve got … Read the rest

“The problem with my salespeople is they’re not cold calling enough!” That’s the concern I hear most often from sales managers and business owners when I speak at conventions on how to boost sales. Yet when I examine their cold-calling strategies, I generally find they’re ill-conceived.

Decision-makers in most organizations soon grow weary of the large number of salespeople phoning them. So if you’re not well-trained when you cold call, I guarantee that you’ll face a lot of rejection.

On the other hand, when you’re professionally trained, cold calling is easy and tremendously profitable. Here are steps to boost your … Read the rest

“Little things” can be the difference between major success and failure for a company. The reason is that people react emotionally because of the attention paid to minor details. We all know that when the smile spreads across our customer’s face, they will be back.

Experience the magic that’s associated with doing the little things — Most people think it’s the big things that make a big difference but in reality it’s the result of a lot of little things being done before that. It’s easy to look over the little things and that’s probably why so few people do … Read the rest

“How do I get more of my reps’ time?”
“What can I do to get them to keep me informed about what’s happening in the territory?” “Why don’t my reps effectively carry my marketing message to customers?”

These questions are hardly new, but they did come to the fore this summer when a group of manufacturers participated in a roundtable discussion.

The consensus of the group of five manufacturers was that the answers to these and other questions reside in the word ‘motivation.’ “In order to be truly successful in managing a team of agents, the principals must take into … Read the rest

Technology is great. It helps us to get more done, connect with others more, and has advanced the living standards of human beings dramatically. Medical and dental technology are so far ahead of where they were even a few years ago, that we don’t want to go back.

But there is a dark side. Technology can be overwhelming.

This often happens when we have expectations that are pressing, based on our desired outcomes. Health care professionals and psychologists have long told us about the dangers of taking on more than we can handle.

I like studying this phenomenon, particularly as … Read the rest

Sales professionals are increasingly finding value in building their own leads and pipeline through social selling. According to the Sandler Training, “We’ve found that many sales professionals struggle with this mysterious task called ‘social selling.’ It’s the kind of thing they know they should do — the kind of thing they are often told they’re doing incorrectly — and maybe even get frustrated with themselves because they sometimes don’t know what to do.”

In “LinkedIn the Sandler Way,” Sandler Training and LinkedIn Sales Solutions share secrets to uncovering ideas for prospecting and selling online. These “secrets” are only secret in … Read the rest

If you’re more than 50 years old and reading this article, I’m pretty positive that these two questions have entered your mind lately: “When can I retire?” and “How much money will I need to live a comfortable life in retirement?”

To be honest, they’re pretty reasonable questions to ask yourself. And based on my experience in the wealth planning world, most individuals answer these questions in one of two ways.