I just got back from what turned out to be one of my favorite business trips of all time.

Now, I have visited some amazing cities on business, including Tokyo, London, Stockholm, Salzburg, and Helsinki. So when I tell you that one of my favorite business trips of all time was Salina, Kansas (population 47,846) that should mean something.

Why is this trip one of my all-time favorites? Because I got to meet with a principal who really, really “gets” the representative system of selling and a representative network of the highest caliber. 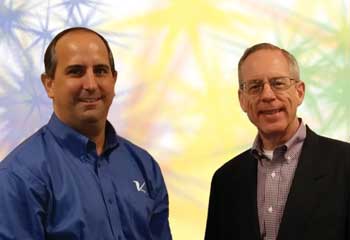 It started a few months ago. Brian Burmaster, Vortex Valves’ Vice President, Sales, contacted me to discuss adding a MANA educational component to Vortex Valves’ national sales meeting. Brian wanted to do more than just train his representatives on his products; he wanted to provide them presentations that would hone the skills they bring to bear on all of their principals’ lines.

Right away, I was very impressed. Whenever I deal with MANA principal members, I am usually struck by their commitment to the representative system of selling. But adding educational components that were not specific to his company’s products to a national sales meeting raises that commitment to a whole new level.*

* A tip of the hat to Charlie Ingram from Eriez Manufacturing, who also brought MANA into his international sales meeting for that same purpose in 2012.

As a long-time MANA member, I have found that one of the most frequently discussed subjects is call reports. Jerry Leth, MANA’s Vice President and General Manager, and longtime liaison to the membership, recently told me he gets at least three calls a month regarding the subject.

Many years ago I was visiting a new principal for orientation and to discuss strategy for the product line. As we were wrapping up the meeting, the sales manager very nonchalantly said, “Oh by the way, we require call reports.” During the course of the day, I noticed a pile of call reports … Read the rest

What are most effective — detailed sales call reports or proactive communication on matters of true importance from agents back to their principals?

This is a subject that’s been the core of many discussions between agents and manufacturers — and it’s a discussion that never seems to go away.

Over the years as the subject has been addressed by MANA personnel, debated in manufacturers’ seminars, on the MANA LinkedIn discussion page, not to mention the pages of Agency Sales, a consensus has been reached.

Give ’em Something to Talk About

Just having a satisfied customer and giving them service that is simply good enough will not get anyone talking. You’ve got to go above and beyond the call of duty if you want your customers to talk about you.

Word of mouth is instrumental in driving your company’s success. Verbal buzz about your business or product passed from one reliable person to the next is still the most cost-effective way to build a loyal following, expand your business, and reach new customers. How does it start? Give them an amazing customer experience and encourage … Read the rest

It’s easy to roll your eyes and moan about the state of business communications — everything from incomplete, inaccurate and confusing e-mails and memos to meeting minutes and reports that don’t make sense. Ineffective business letters, most of which are peppered with the first-person singular pronoun, are fodder for the recycling bin.

All this results in errors, causes confusion, wastes time, creates aggravation, and puts even capable workers at an advancement and career disadvantage, not to mention the negative implications for their employers.

It’s any wonder that productivity, which is dropping, isn’t collapsing. However, it’s irrelevant whether or not the … Read the rest

After more than 26 years in sales and sales management, I’ve heard many excuses from struggling salespeople. Here are the most popular ones and my thoughts on each.

The Top Excuses That Lead to Sales Failure

First and foremost, if low price were the only factor, there would only be one company in business in each industry: the company with the lowest price. My guess is that you have many competitors. I’m also guessing that the lowest-price provider has the smallest segment of the market, or they’re really close to the bottom. This is because … Read the rest

Long-time friend of MANA Bob Reiss has graciously allowed Agency Sales magazine to serialize his book Bootstrapping 101: Tips to Build Your Business with Limited Cash and Free Outside Help, available now on Amazon.com. The book looks at surprisingly effective low-cost and no-cost ways to acquire the resources you need to run your company. Whether your company is an existing enterprise or a start up, a manufacturers’ representative company or a manufacturer, this book will introduce you to innovative ways to cut your costs and drive more of your income into bottom line profits.

Oftentimes entrepreneurs — blinded by their … Read the rest

Why is it that some sales reps consistently earn a six-figure annual income while other reps, putting in the same hours, selling the same products, and trained by the same sales manager struggle each month financially to make ends meet? The answer to this question is painfully simple; the six-figure sales reps understand the importance of business development and never forget to ask for referrals.

How to up-sell without turning off your customer.

If you and your employees aren’t trained on effective ways to upsell, chances are you either offend customers by being too pushy, or leave money on the table that customers would have willingly spent with you. Either option is costly.

When organizations bring me in to train employees on how to increase revenues from current customers, I often find that not enough attention is paid to up-selling.

Up-selling refers to when you help a customer decide to buy a little extra or “up-grade” slightly the final purchase. A car dealer, for example, … Read the rest

The New Year provides an opportunity for a fresh start — a chance to plan ahead, redouble efforts and strategize to improve over past performance. That’s exactly what independent manufacturers’ representatives do, just like everyone else. As the 12 months of 2015 loom in front of agents, several volunteered how they were viewing the upcoming months and described what they see as opportunities to take advantage of, challenges that must be met, problems to be solved and obstacles that must be overcome.

MANA wants to recognize members who have been with us for many years.

MANA thanks and congratulates the members we listed below for their long-term support and commitment.

Just as manufacturers have a checklist made up of the attributes they’d like to have in their independent manufacturers’ representatives, so too do agents have a wish list. During an industry meeting last fall, a group of representatives at a roundtable were discussing what they’d like to have in a marketing partner. Among their considerations were these:

Manufacturer’s current market position — Since agencies spend a great deal of their time promoting new products, they want to know that a prospective principal is active in this area. At the same time, they need to be apprised of the manufacturer’s current … Read the rest

If there is any doubt concerning the contribution that social media can make to the selling process, those doubts should be put aside. At least that’s from even the most casual reading of business books that come across the Agency Sales editorial desk. Even the smallest sampling of these books indicates that authors, educators and consultants see social media as a critical tool and one that independent manufacturers’ representatives ought to carefully consider.

•   Technological trends that impact selling that manufacturers and representatives and others ought to be following include these: newsletters, video e-mails, website chats and Internet … Read the rest

The Minnesota Legislature recently passed and Governor Dayton signed, a significant amendment to Minn. Stat. §325E.37, otherwise known as the Minnesota Termination of Sales Representative Act (“MTSRA”). The amendment passed with overwhelming bi-partisan support and essentially closes a loophole in the existing law. It will benefit certain independent contractor sales representatives as defined under the MTSRA.

In the early 1990s the MTSRA was enacted in Minnesota. It was enacted to regulate the relationship between a manufacturer, wholesaler, assembler, or importer (referred to herein as the “principal”) and a sales representative, as defined under the MTSRA, with regard to … Read the rest

Comparing the Relative Strength of Humans, Horses and Your Investments

Have you ever heard the expression that describes an athlete as “pound-for-pound” the strongest, referring to the relative strength of that individual? This comparison phrase is what coaches use to measure strength levels for athletes of varying body weights.

Gibbons received their Civic Award for his long-term involvement in the organization’s sustainability efforts promoting green (vegetative) roofs as well as his activities in writing standards for municipal, state and national governments, architects and landscape architects, and additional companies involved in the design and construction of green roofs. He was responsible for the recent publication of ASTM E2777-14 “Standard Guide for Vegetative (Green) Roof Systems.”